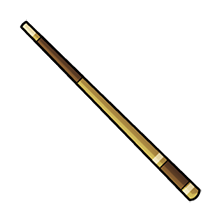 “Don't get into a bar fight without it.”— In-game description

The pool cue is a weapon that appears in Fallout Shelter. It was added with the 1.6 update.

Unlike most other weapons, only one dweller with a pool cue can attack a given opponent at a time. So, for instance, if three dwellers are fighting a single deathclaw with a pool cue, only one of them will actually fight; the other two can't attack.

The pool cue is a Rare weapon with a damage ranging from 0 to 8, leading to an average damage of 4. This weapon shares the same minimal damage of 0 with the BB gun, meaning that there is a 11% chance that the cue will deal no damage at all.

A high Agility statistic is needed to effectively create the pool cue.

Pool cue card
Add a photo to this gallery
Retrieved from "https://fallout.fandom.com/wiki/Pool_cue_(Fallout_Shelter)?oldid=3100450"
Community content is available under CC-BY-SA unless otherwise noted.