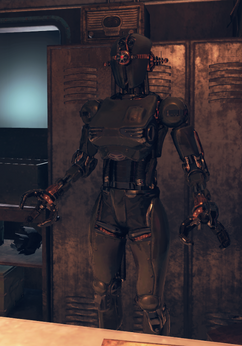 The Wayward
Gauley Mine (initially)

Polly is an Assaultron working for Duchess in 2103.

Polly was Duchess' robot, which she used as protection to prevent assaults and robberies at The Wayward, in addition to using her as a servant and assistant. According to Duchess, her personality was based on a boxer who was an ex-girlfriend of her programmer; Sol instead believes her personality was modelled after Duchess herself.

Sol, a friend of Duchess, managed to convince her that Polly was "a lot more than that," seeing "a real lady" in the robot. While searching for Crane's treasure in Gauley Mine, Sol and Polly were overwhelmed by Scorched, and Sol took a bullet to the leg. Seeing him go down, Polly went berserk on the Scorched, but ended up losing her head, disconnected from her Assaultron body. When the player character discovers Polly, her head must be picked up to clean the cave of the Scorched and return to The Wayward.

When they are back at The Wayward, Polly's head is placed in a moonshine jug, as the player character goes to Duncan & Duncan Robotics in Summersville to attach a transmitter to a pristine robot which will become her new body. The body can be either an Assaultron body, a Mister Handy body, or a Protectron body.

Afterwards, the body is retrieved by Sol and Duchess, and Polly can be seen in the reception area of the bar after it formally opens with the body the player character has chosen.

Polly appears only in Fallout 76, introduced in the Wastelanders update.

Polly, with her head detached

Polly with a Protectron body

Polly in her Mister Handy body
Add a photo to this gallery
Retrieved from "https://fallout.fandom.com/wiki/Polly_(Wastelanders)?oldid=3422240"
Community content is available under CC-BY-SA unless otherwise noted.