Polly's Assaultron head is a non-automatic pistol in Fallout 76, introduced in the Wastelanders update.

The salvaged head of Polly the Assaultron. It is charged by reloading repeatedly. The more charges, the higher the damage.

Found on a flipped over minecart in Gauley Mine, during the quest Strength in Numbers. The player character is required to remove her from their inventory to continue the aforementioned quest. 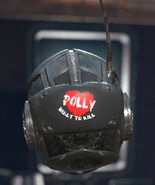