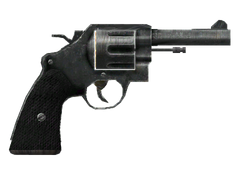 The police pistol is a weapon in the Fallout: New Vegas add-on Dead Money.

The police pistol shines in three key performance areas: it has a high damage output with critical hits, especially so with the Better Criticals perk; it has a fast fire rate; and, due to its swing-out cylinder, it can be reloaded quickly. It is considered a holdout weapon, and can be concealed and taken into weapon-free locations, regardless of the Courier's Sneak skill.

The police pistol can fire a total of about 1,120 standard rounds, the equivalent of 187 reloads, from full condition before breaking.