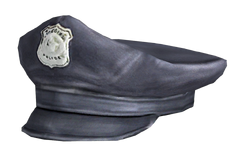 The police hat is a piece of headwear in the Fallout 3 add-ons Broken Steel, Point Lookout and Mothership Zeta.

The police hat is dark blue of color with a silver-colored badge on the front side. The badge is inscribed with the words "SPECIAL" and "POLICE."

The police hat can be repaired with the Enclave officer uniform, among others, allowing you to repair it easily with Enclave respawns when you run out of police hats. Among others is the merc grunt outfit, pre-War hat, pre-War bonnet, dirty pre-War casualwear, and dirty pre-War spring outfit.