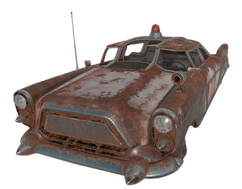 The police car is a pre-War law enforcement vehicle in Appalachia.

The police car is a Chryslus Corvega Atomic V-8 used by police in West Virginia before the Great War. Compared to the patrol cars used by California and Nevada highway patrols, it has both front and back doors, lacks a turbocharger, and is built off of a sedan instead of a coupe.

The police Corvega appears only in Fallout 76 and was cut from Fallout 4.

Police Corvega as seen in The Art of Fallout 4

Add an image to this gallery
Retrieved from "https://fallout.fandom.com/wiki/Police_car_(Fallout_76)?oldid=3322254"
Community content is available under CC-BY-SA unless otherwise noted.