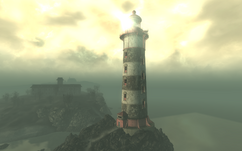 The lighthouse, in working order

“Blue - Couldn't raise you on the phone this morning, so I'm having Jenny bring you this note. Your delivery for the store got turned around on those new roads and had an accident. He’s run off the road by the cathedral. They’ll need some time to sort things out, but Pagano probably won’t want to wait that long to replace the lighthouse’s beacon bulbs. You might want to get over to the wreck yourself and hand-deliver the bulbs.”— Holotape note

The lighthouse, although thought to be owned and operated by the government of Maryland, was a tourist attraction hiding the Calvert family's underground research hospital.[Non-game 1]

The lighthouse is a moderately sized tower with some small, but notable stashes of loot. The interior of the lighthouse has a long spiral staircase leading up to a top platform area. The staircase is littered with the skeletons of what appear to be tourists to Point Lookout (the cameras surrounding some of the bodies suggest this) and a police officer (the police hat and .32 pistol suggest this). The platform at the top of the stairs has a door that leads to an exterior balcony. Once smugglers occupy the lighthouse, the staircase can become treacherous as they will shoot down the staircase if they spot the player character. The most notable location of the building is the basement which it is necessary to go into during the quest A Meeting of the Minds.

The Point Lookout Lighthouse is based off the real world location of the same name.

Point Lookout Lighthouse as seen from the south-east beach.

Lighthouse after repair, from Calvert Mansion

Some of the supplies found after the smugglers move in

Retrieved from "https://fallout.fandom.com/wiki/Point_Lookout_Lighthouse?oldid=3496382"
Community content is available under CC-BY-SA unless otherwise noted.