Point Lookout
“Welcome to Point Lookout, my friend! The trip was fine, the weather's nice and damp, and everything out there looks pleasant as ever! Looks like nothing's changed since my last visit... except all that smoke I saw on the way in.”— Tobar

Point Lookout is a location downriver from the Capital Wasteland in 2277.

Long before the Great War, the region of Point Lookout was discovered by English explorer John Smith in 1612.[1] Over two decades later, in 1634, two ships known as the "Ark" and the "Dove" landed near Point Lookout. The settlers constructed the Ark & Dove cathedral, naming it after the vessels that brought them to the New World.[2] Point Lookout continued as a successful settlement.

Events of the American Civil War took place in Point Lookout, and the Lone Wanderer can still find Confederate hats throughout the region. The small seaside town became a tourist attraction, particularly with the boardwalk that pays homage to the original English settlers called "Pilgrim's Landing."

As during the American Civil War, the secluded backwater swamps of Point Lookout harbored another military prison, the Turtledove Detention Camp, for Chinese-Americans suspected of espionage against the United States, during the Sino-American War. The infamous spy Wan Yang was arrested in Point Lookout and taken there for interrogation, subsequently dying at the camp.[3] Meanwhile, just off the coast of Point Lookout, a Chinese submarine patrolled and gathered information. This submarine was ultimately discovered and disabled, at which point a single submariner was captured and taken to Turtledove. The United States Navy successfully salvaged the submarine just prior to the Great War.

Point Lookout was never directly hit by the nuclear bombs that fell during the Great War, but here, the water of Point Lookout's bogs were contaminated by the Potomac River that flows out of the Capital Wasteland. The irradiated terrain gives way to dense swamps and abandoned buildings where nature has largely replaced the human presence over two centuries. The pervasive radiation in the swamps led to the evolution of the swampfolk, a crazed, highly deformed, inbred people who live all around the swamps of the region.[4] The radiation also gave rise to feral ghouls and swamplurks being drawn to the area's radioactive swamp waters.

Point Lookout is almost devoid of any organized society or signs of civilization, but one can trade or speak with Tobar the Ferryman, Haley of Haley's Hardware, Panada, Marguerite and the local tribals. Point Lookout is more than just a small swampy marsh, but a cache of pre-War technology waiting to be found. The area became known to outsiders from the Capital Wasteland thanks to punga fruit, a unique fruit known to grow only in the local bogs, and many legends about the supposed treasures hidden there.

The muck surrounding the region contains biogas, accumulated because of the radioactive contamination of the Civil War-era mass graves in the area.[5] The decomposing bodies buried in these ancient mass graves were slowly decomposed into methane due to the unique environment, a dense limestone wetlands substrate.[6] Due to the radiation's effects on the normal process of decay the mass Civil War-era graves in the area have become patches of a greenish-gray, smoking and/or steaming earthy muck that releases flammable methane bubbles occasionally.

There are 31 marked locations within Point Lookout.
Marked

It takes one month in-game time to travel from the Capital Wasteland to Point Lookout.

Point Lookout appears in the Fallout 3 add-on of the same name. 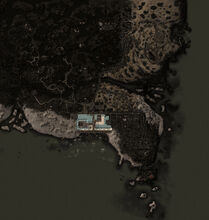 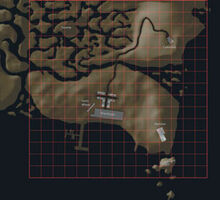