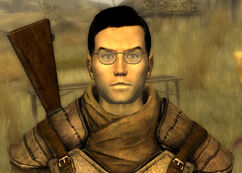 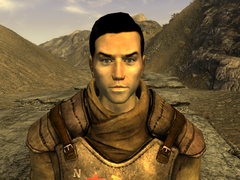 Poindexter without his glasses

“Suffice to say I'm a certified genius, and when I'm discharged from this pit of testosterone and failure, I'll have all the money I could ever need.”

Private Poindexter is an NCR soldier and part of the Misfits living in Camp Golf in the Mojave Wasteland in 2281.

Poindexter is a self-serving know-it-all type. He figures the best way to survive his time as a conscript in the NCR army is to play dumb and hide out in the rear at Camp Golf and earn a salary while serving. He is also very condescending to anyone he views as less intelligent than him, which is pretty much everyone.

Poindexter was intended to be a Caravan player at one point during development. The dialogue option for this, along with the associated voice clip, remains in the game, but Poindexter himself is not a member of the faction necessary to use the dialogue. Additionally, Poindexter does not carry any money, does not have a Caravan deck specific to him, and his remaining dialogue option does not include the script necessary to initiate a game of Caravan.

Poindexter is marked as "Respawns", meaning if he is killed he will be resurrected within three days of his death. [verified]

Retrieved from "https://fallout.fandom.com/wiki/Poindexter?oldid=3124420"
Community content is available under CC-BY-SA unless otherwise noted.