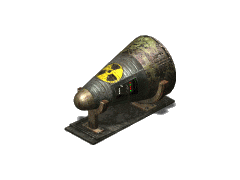 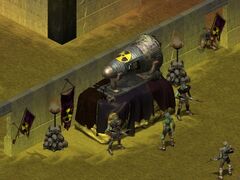 Plutonius is a nuclear warhead worshiped as a god by a cult of ghouls in Kansas City in 2197. It was produced by Manhattan Projects Inc..

Before the Great War, Kansas City was a major nuclear launch site. After the city was hit by the bombs, the surviving silo staff were turned into ghouls, and formed a town called Gravestone in the ruins of the city.

Only one nuclear bomb was left intact in the silos, and the ghouls took to worshiping it as a god, "Plutonius."

Plutonius was later taken by the Brotherhood of Steel, placed on nuke carrier, and used to crack open the entrance to Vault 0 in order to assault the Calculator.

"Plutonius" attached to a nuke carrier
Add an image to this gallery
Retrieved from "https://fallout.fandom.com/wiki/Plutonius?oldid=3189710"
Community content is available under CC-BY-SA unless otherwise noted.