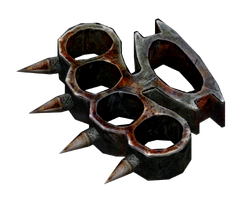 Plunkett's Valid Points are a set of unarmed weapons in Fallout 3.

This section is transcluded from Brass knuckles. To change it, please edit the transcluded page.

Developed in antiquity, this weapon is nevertheless quite prevalent in the post-Great War wastelands.

Brass knuckles, or knuckledusters, take the form of four linked metal rings in a shallow convex formation with a bumper attached to the concave face. The rings are slipped over a combatant's fingers with the bumper pressed into the palm of the hand. When a punch is thrown, the brass knuckles take the majority of the impact impulse, transferring much of the punch's kinetic energy to the target by way of the harder, smaller impacting surface of the metal knuckles. This drastically increases the likelihood of serious tissue disruption and bone damage.

Plunkett's Valid Points was Junders Plunkett's weapon of choice, a lightweight set of spiked knuckles. Plunkett had murdered many using his fists alone. When his raider brethren were hunted down by Regulators he sought refuge in Arlington House, where he awaits someone worthy to hunt him down and take up the knuckles, hoping the bounty hunter will seek out a just cause with it.

Perhaps the biggest selling point for this weapon is the fact that it has one of the lowest Action-Point costs per-shot of almost any weapon in Fallout 3. Assuming you have maximum Agility and the Action Boy/Girl perk, you could string together 7 hits in a single V.A.T.S. attack. Add in the benefits of Ledoux's hockey mask and the tribal power armor, and you can pull off 9 hits, with 13 AP to spare. This combined with the Paralyzing Palm perk will result in paralyzing enemies nearly every time you enter V.A.T.S., enabling the player to kill even super mutant behemoths without much effort.

Plunkett's Valid Points can successfully strike about 333 times from full condition before breaking.

Plunkett's Valid Points are dropped by Junders Plunkett who is found at the Arlington House in the Arlington Cemetery. You must have the Lawbringer perk to get this item. The contract for his bounty can be found on the body of a dead Regulator nearby, though finding this is not necessary for finding Plunkett.

Retrieved from "https://fallout.fandom.com/wiki/Plunkett%27s_Valid_Points?oldid=3127691"
Community content is available under CC-BY-SA unless otherwise noted.