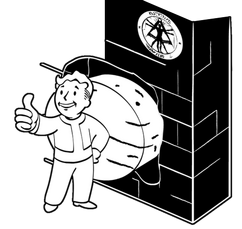 Plugging a Leak is an Institute side quest in Fallout 4. It can be accomplished for the benefit of the Institute or against their interests.

Speak to Doctor Justin Ayo of the Synth Retention Bureau. He suspects that someone within The Institute is helping synths escape. His prime suspect is Doctor Alan Binet in the Robotics department. Go there and access any terminal to read the logs. Additionally, Doctor Binet can be spoken to.

The terminal will lead the Sole Survivor to the Binet residence, where they will find the doctor's son, Liam Binet, and Liam's "mother," Eve. While there, access the terminal and read the logs. Return to the Synth Retention Bureau, access one of their terminals and read the logs.

The Survivor will then be directed to the maintenance room, where Eve will be found acting suspiciously. She claims to have developed a motherly attachment to Liam and has been covering his tracks. Unhappy at being found out, she will point a gun at the player character. At this point, either eliminate her or pass a Hard Charisma check to convince her to stand down.

Whatever the decision, head back to Liam at the Binet residence. When Liam is confronted, one will have two options: Report Liam to Doctor Ayo or frame Doctor Ayo.

Return to Dr. Ayo and inform him of Liam's actions to receive a reward of 1,000 caps and end the quest. Further to this, Liam will be banished from the Institute.

Go to Ayo's quarters and access his private terminal. Disable the safeguards and return to Liam to end the quest and receive Liam's glasses as a reward. Justin will then be replaced by Alana Secord as acting director.

Retrieved from "https://fallout.fandom.com/wiki/Plugging_a_Leak?oldid=3416808"
Community content is available under CC-BY-SA unless otherwise noted.