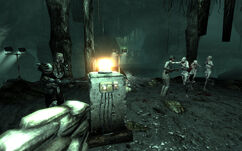 “Welcome, welcome to my extraordinary safari! Shall we get you registered?”— Plik

Plik's Safari is a side quest in the Fallout 3 add-on Point Lookout.

When first entering the Coastal Grotto, there is a small room on the right which contains Plik's journal (on the desk), and some minor loot. Reading it awards the Ghoul Ecology perk, which gives a 5 point damage bonus when fighting ghouls. Plik is located further down the hallway, and offers a chance to join his small hunting club, but only if paid the entry fee of 1,000 caps. Pay the fee, and ask to join in the next safari.

Enter the door behind Plik, and meet the other contestants for this hunting excursion, Jacob Humboldt and Rip Smithy. After preparations have been made to begin the hunt, flip the switch on the block in the center of the room.

Several waves of leveled feral ghouls, ranging from swamp ghouls to glowing ones will begin swarming the platform and immediate area. Jacob and Rip are hardly worthy allies, and will usually perish during the onslaught if not heavily supported.

Wearing the ghoul mask does have an effect on the quest. Initially, the ghouls will not be hostile towards any of the contestants. However, upon attacking one ghoul, all ghouls will become immediately hostile to everyone, including the one wearing the ghoul mask. There is no Karma penalty to killing the non-player character battle mates as they are able to be killed in the hunt, as well.

The Dismemberer and 100 XP. After the last feral ghoul stops breathing, the safari is over. Walk out, and talk to Plik to receive the reward: The Dismemberer, a unique axe Plik pilfered from one of his club members who "won't be needing it anymore."