Helps nobody
“I've found that price keeps the riff-raff out. You aren't riff-raff, now, are you?”

Plik is a ghoul inhabitant of Point Lookout in the year 2277.

A jovial host of his prestigious hunting club for society's richest (or most bored) clientèle, Plik has witnessed the spread of feral ghouls in the area, and seeks to limit this encroachment while attempting an enterprising scheme in the process.[1]

Plik runs a little hunting club out of the coastal grotto, but it is "strictly for high-rollers." It appears Plik has a scientific background and has taken extensive notes on the anatomy of feral ghouls, referenced in his journal which will grant one the Ghoul Ecology perk upon reading.

Plik appears only in the Fallout 3 add-on Point Lookout. 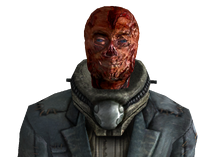 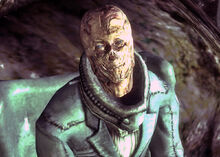