The platinum chip was designed by Robert House[1] and was printed at great expense in Sunnyvale on October 22, 2077, a day before the Great War, but it became lost in the following nuclear holocaust.[2] After regaining consciousness from his coma after saving Las Vegas from full nuclear destruction, Mr. House spent millions of caps (812,545 in 2280 alone)[3] to find it. Around late 2281, the platinum chip was finally located by one of these scavenger teams. Cautious about its arrival, Mr. House first had delivery paths, avenues and routes screened prior to having it sent to New Vegas via the Mojave Express, along with five other dummy packages of various novelty items so as not to convey its importance to anyone like raiders or the Brotherhood of Steel.[4][5]

Carried by the Courier from southern NCR, through the Hub,[6] to New Vegas, the chip was intercepted by Benny around Goodsprings after attaining the exact route through Yes Man. House's protégé intended to use it to gain control of the New Vegas Strip and make it an independent power in the wasteland, free of his employer's machinations.[4] The only locations on Earth that have the computer hardware necessary to read the chip are inside the Lucky 38 casino and a weather monitoring station on Fortification Hill.[7]

The chip is a sophisticated, high-density data storage device.[8][9] In addition to opening otherwise locked facilities controlled by the Lucky 38 casino's computers, the chip contains the Mark II operating system for Securitron robots. The Mark II operating system has numerous features that the Mark I system lacks, such as drivers for an auto-repair system as well as the correct drivers for the grenade and missile launcher weapons that all Securitrons are equipped with but unable to use.

Though a proprietary format,[8][9] the platinum chip also contains software upgrades for the Lucky 38's systems. Besides being a casino and the headquarters for Mr. House's endeavors, the Lucky 38 is also armed with a missile defense grid. During the Great War, these weapons were used to prevent most of the nuclear warheads from destroying Las Vegas and the surrounding area,[10] and, if the platinum chip had reached House in time, would have prevented all of the warheads from hitting the Vegas area. Despite its name, it is not made of platinum, rather it refers to the data itself.[11]

Inside the game files exists an unused duplicate item called just "Platinum Chip" (no "The"). It has a value of 1 and uses the blue pass card as a model. 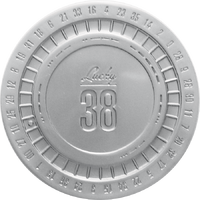 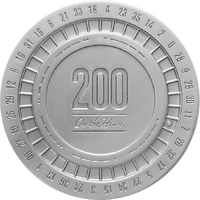 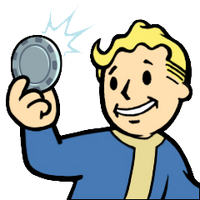 As depicted in Ring-a-Ding-Ding!