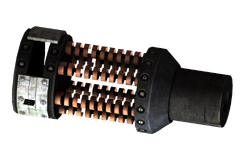 This mod increases the speed of bolts fired by a plasma rifle by 200%. It appears as a large sheath around the barrel with lights moving up and down that appear to be a series of electromagnetic coils (which would explain the increased velocity since plasma can be manipulated by electromagnetic fields).

Plasma rifle with the magnetic accelerator modification
Add a photo to this gallery
Retrieved from "https://fallout.fandom.com/wiki/Plasma_rifle_mag._accelerator?oldid=3481066"
Community content is available under CC-BY-SA unless otherwise noted.