The plasma pistol is a weapon in Fallout: New Vegas.

This section is transcluded from plasma pistol. To change it, please edit the transcluded page.

The plasma pistol is a powerful energy-based pistol, firing superheated bolts of green plasma. It is able to punch through most critters and low-level types of armor with ease.

The plasma pistol can cause 33 damage per shot in good condition before added perks, while remaining fairly accurate and cheap to use in V.A.T.S. Furthermore, it is considered an improved holdout weapon, and can be concealed so long as the Courier's Sneak skill is 50 or greater.

However, like the other plasma-based weapons, the plasma pistol suffers from common drawbacks, it consumes two energy cells with every shot, eating through ammunition at a much faster pace. Additionally, upon firing, the plasma pistol's projectile produces a large green burst of light which partially obstructs view, and the plasma bolts travel at a very slow rate resulting in the need to lead the shot.

The plasma pistol can fire a total of about 745 times using standard cells, the equivalent of 47 reloads, from full condition before breaking.

Non-player characters who are given the plasma pistol will carry the correct ammunition (energy cells), but will carry drained microfusion cells instead of drained small energy cells. [verified] 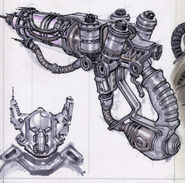 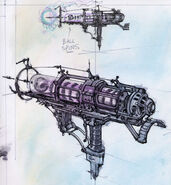