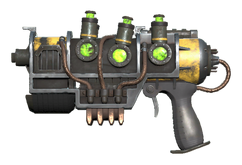 This section is transcluded from plasma rifle. To change it, please edit the transcluded page.

Initially, the weapon was a bulky, industrial plasma caster, manufactured by Winchester Arms; while it performed admirably, it was expensive and required specialized training to use. However, later developments for the United States Army would lead to a more compact design that was cheaper to produce and easier to train for, perfectly suited for urban warfare.[6]

Retrieved from "https://fallout.fandom.com/wiki/Plasma_gun_(Fallout_76)?oldid=3407519"
Community content is available under CC-BY-SA unless otherwise noted.