The Plasma Defender is an energy weapon in Fallout: New Vegas.

The Plasma Defender is a powerful energy-based pistol that fires superheated bolts of green plasma. It is able to punch through most critters and low-level armor with ease, when compared to the more commonly found and cheaper laser pistol.

In comparison to the standard laser pistol, the Plasma Defender deals more than 3 times the damage per shot and over twice as much damage-per-second (DPS). This is offset by the fact that it consumes energy cells at twice the rate, has reduced durability, and has a slightly increased spread. Additionally, it causes a large green burst of plasma upon firing which in addition to partially obscuring the view, travels at a slower rate, resulting in the need to lead the target.

The Plasma Defender can fire a total of about 495 times using standard cells, the equivalent of 31 reloads, from full condition before breaking.

Plasma Defenders are not randomly sold by any merchants, including the Van Graffs and the Gun Runners. This is due to their absence from a number of leveled item lists while being present on several other lists that are not used. The only exception is a single Plasma Defender which can be found on the display table in front of Gloria Van Graff. 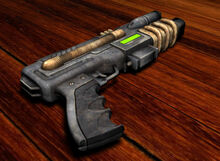 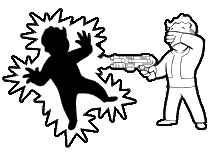 Plasma Defender in the perk image for Meltdown 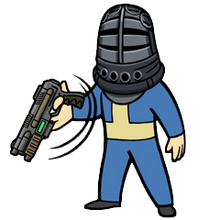