Plan: Gamma gun is a weapon plan in Fallout 76.

Has a 21% chance to be sold by Grahm if the player character is level 20+.

The plan unlocks crafting of the gamma gun at a weapons workbench. 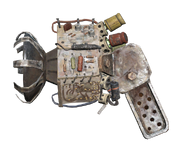