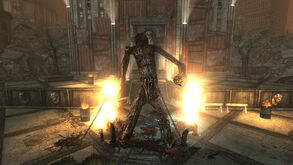 Dependent on Lone Wanderer's actions.
Ishmael Ashur is killed, Uptown is overrun by trogs, and the Cure is acquired.
Alternatively, Wernher's plot and the slaves' rebellion crushed, and the Pitt returns back to normal.

The Pitt Uprising was a civil uprising of slaves ruled by Ishmael Ashur's raiders in the Pitt, taking place in the year 2277.

While the detachment of the Brotherhood of Steel under Owyn Lyons was heading east across the continental United States, bound for the Capital Wasteland to look for lost technology in the nation's former capital of Washington, D.C., they encountered many groups of survivors whom had adapted in various ways to the post-apocalyptic conditions. One such region was the Pitt, formerly known as Pittsburgh. Before the Scourge, the Pitt was lawless and ruled by no one, with rape gangs, raiders, slavers, and many other kinds of horrors all freely wandered, terrorizing the few innocent survivors.

Owyn Lyons led the Scourge, a large-scale military action that wiped out nearly the entire population of the Pitt. In a single night, the Brotherhood swept through the city, eliminating any resident who put up a fight. Although the intent of the Scourge remains unclear, several unmutated children were taken from the Pitt easily by the Brotherhood and placed into initiate training, such as Paladin Kodiak. The motivations for the Scourge are unclear to this day, but many in the Brotherhood note that it was a marked change in the way the Brotherhood operates. Additionally, it is known that something was recovered from the Pitt during the Scourge, although to date it would seem that only Elder Lyons knows what it was.

During the Scourge, Paladin Ishmael Ashur was caught in an explosion and was presumed to be their only casualty, so the Brotherhood left him within the mill and moved forward towards Washington, D.C.. Ashur lay there for hours, but soon he was pulled out of the rubble by scavengers trying to steal his armor. Ashur impressed them, with some even considering him a god. He then brought the scavengers in the area together, starting the city.

He chose to start the city in the Pitt because he was touched by the tenacious locals, and the fact that it contained the only operational steel mill the Brotherhood had ever run into. Therefore, he recruited everyone in the area, killed raider leaders and made the rest follow him. It was not long before Ashur realized that simple raider gangs would not be enough, and to his discretion he soon started to use slaves (whom he insists on calling "workers" to remind them that they all have a chance at freedom, no matter how slim); he admits he hates to do this, but claims "it has to be done" since citizens of the Pitt are unable to have children due to the Troglodyte Degeneration Contagion.

The Pitt began to slowly rebuild, the slaves made great progress in making things operational in the Pitt again, Ashur occupied Haven as his temple, overseeing the Pitt from its highest peak. At some point during his time at the Pitt, Ashur married Sandra Kundanika, a Pitt raider scientist, and then moved into Haven along with Ashur.

A year or two before 2277, Sandra had become pregnant with a girl. When the baby was delivered, she was named Marie. Marie had a special ability that the rest of the Wasteland lacked; she was immune to mutation. Ashur and Sandra quickly set to work on developing a cure for their fellow Pitt inhabitants, hoping that they could finally have a cure.

Ashur's lieutenant, Wernher, deserted the Pitt and Ashur's army sometime during or after 2277, and set up a radio signal in the Capital Wasteland seeking assistance to free his people. He had developed a plan to retrieve the cure and free his people from Ashur's rule. The Lone Wanderer arrived and went with Wernher to the city. Once there, the Lone Wanderer sought out Midea, the co-leader of the escape effort. The Lone Wanderer pretended to be a slave, and hunted for steel ingots in the Pitt steelyard. On the Lone Wanderer's return, Ashur gave a speech to the slaves, informing them of the battles in the arena. The winner of the arena battles earned the right to leave slavery and live in the Pitt's Uptown, and join the ranks of the Pitt raiders. The Lone Wanderer fought through the arena battles, killing the likes of the Bear Brothers, and Gruber.

The Lone Wanderer entered Uptown and made their way into Haven, Ashur's palace, and spoke with Ashur. While speaking, the slaves began rioting, and Wernher's plan was underway. During this, the Lone Wanderer could have carried out Wernher's plan and stole the cure, taken it back to Wernher, and shut off Uptown's lights, overrunning it with trogs and killing all of its inhabitants. Alternatively, they could have sided with Ashur, and quelled the riot, killing Wernher or convincing him with a Speech check to leave the city for good.

If the slaves were assisted, they would have been under either the Lone Wanderer or Wernher's rule, and tried to make a home of out of the region. Midea would look after Marie, and continue to find a cure from her. If Ashur was assisted, the Pitt would have been returned to normal, and a cure would have eventually been found.

The Pitt Uprising appears only in the Fallout 3 add-on The Pitt.

Retrieved from "https://fallout.fandom.com/wiki/Pitt_Uprising?oldid=3140829"
Community content is available under CC-BY-SA unless otherwise noted.