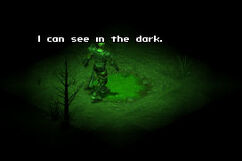 Riddick isn't afraid of the dark. Are you? 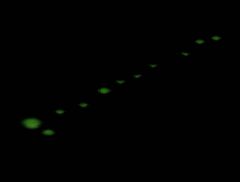 Pitch Black is a special encounter in Fallout Tactics.

In this encounter, your group will start off in the center of the map, completely surrounded by darkness and a few pools of radiation. There are eighteen large deathclaws that patrol this map (nine to the North in three clusters, nine to the South also in three clusters) along with a special, friendly NPC named Riddick who walks East. If you manage to make it to exit zone while keeping Riddick alive, you'll be able to recruit him later at one of the Brotherhood of Steel bunkers.

It is possible to let Riddick find his way to the exit zone by himself and then have the rest of your group attempt to run or sneak across the map, thus avoiding a very difficult fight.

If you return to the encounter site a second time, Riddick and all of the Deathclaws will be gone.

This encounter is a reference to the film of the same name, Pitch Black.

Retrieved from "https://fallout.fandom.com/wiki/Pitch_Black?oldid=2919322"
Community content is available under CC-BY-SA unless otherwise noted.