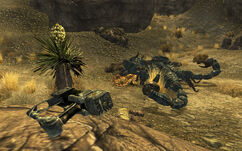 “Still, I haven't been exiled yet, or worse, assigned to latrine-cleaning duty. But I will, if you don't help me find that gun.”— Stanton

Pistol Packing is an unmarked quest in Fallout: New Vegas.

Knight Torres, the quartermaster for the Brotherhood of Steel in the Hidden Valley bunker, will mention that she is missing one laser pistol from her inventory, which the Courier can volunteer to help find. After speaking to her, head next door to the firing range and speak to the paladin sitting at the desk there (if the paladin range master isn't at the firing range desk, try going down to the deck below and stepping into the large bedroom where he should be sleeping and speak to him). Mention the pistol, and the paladin will mention that Initiate Stanton was the last one to check it out, but signed it back in afterward. It is necessary to do this before talking to Stanton, or else he will claim that he doesn't know anything about it.

Stanton can be found wandering around the first floor of the bunker or in the classroom during the daytime. At night, Stanton will be inside the initiate barracks, which is opposite of the long, oval-shaped hallway from the firing range. When speaking to him, mention the pistol he checked out. He will admit about how he and Apprentice Watkins went out to the scorpion gulch for a "training exercise." Once he and Watkins realized the scorpions were more than they could handle, they ran away and he dropped the pistol in the confusion. If mentioning that the pistol has been checked back in, he tells the Courier that he falsified the records. From here, the Courier may volunteer to retrieve the pistol (the pistol will not spawn in the gulch until the Courier speaks with the paladin at the Range and then Stanton).

Scorpion gulch is just southeast through a broken fencing line from the bunker. After going through the gulch, the missing laser pistol will be on top of a rock, in the middle of the lowest part of the gulch. The gulch will usually have various scorpions roaming around the area.

Once the pistol has been obtained, return to Torres. She will have a tri-beam laser rifle and will give it to the Courier as a reward for services rendered. The Courier will also receive positive reputation among the Brotherhood of Steel.

The quest title is a reference to the 1943 song "Pistol Packin' Mama" by Al Dexter, who adapted it from the traditional folk song "Boil Them Cabbage Down."