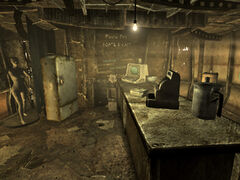 Pirate Pely is a "Boats & Bait" shop located just south of the irradiated metro and north of the Jefferson Memorial. This is an unmarked location and cannot be fast traveled to.

Pirate Pely is a small shack with a pier at the bank of the Tidal Basin. There are a few waterlogged boats located outside, though they are unusable. The shop dealt with "Rentals, Worms, Ice Cream and Talking Parrots."

The building's interior is very small. There is a drinking fountain in the right corner and a set of lockers on the left. Behind the counter, there's a refrigerator and a mannequin, as well as a footlocker. Under the counter, almost directly beneath the cash register, is a hard locked safe. The safe may also be opened with the Average locked terminal on the counter. A single radroach occupies the shack.

Pirate Pely appears only in Fallout 3.

This area is a nod to Fallout 3 lead artist Istvan Pely.