“Never thought a reporter could consider themselves a success until someone threatened their life. Me? I'm very successful.”

Piper Wright is a reporter living in Diamond City in 2287 and possible companion of the Sole Survivor. She runs her own newspaper called Publick Occurrences, which she operates with her younger sister, Nat.

Piper grew up in a small community on the outskirts of the Commonwealth with her sister, Nat and their father, a member of the local militia. After her father was found dead under suspicious circumstances, Piper learned that he had discovered a raider plot to sack the town. His superior, Captain Mayburn, arranged to leave the main gate open and unguarded one night to allow raiders access in exchange for a cut of the loot.

Piper's father was murdered by Mayburn to keep him silent. The local authorities did not believe her claims and refused to investigate. Piper then created and circulated wanted posters featuring the captain and a list of his crimes. The settlers, outraged by the story, exiled Mayburn. When the raiders eventually showed up expecting the gate to be wide open, they instead met the aware citizens who drove them away.

Eventually Piper and Nat saved enough money to relocate to Diamond City where she began her career as an investigative journalist. Her fervor for discovering the truth made her popular for a while, but eventually public opinion turned against her because her articles were seen as being too negative. Piper's work yields results often at the expense of her own safety, the first example of this that the Sole Survivor encounters is their first time meeting Piper, with her having gotten herself locked out of Diamond City on orders of McDonough, the cities mayor, after Piper published an article suggesting the mayor was in fact a synth.

Piper was responsible for exposing a caravan cartel for driving up food prices in Diamond City. The cartel retaliated by poisoning her drink at the Dugout Inn, but she managed to purge the poison by drinking moonshine and had several members of the cartel arrested. Her investigation into irradiated drinking water at Bunker Hill led her to discover that the culprits were Children of Atom cultists. Threatened with execution, Piper tricked the cultists into believing she had a vision from Atom. After the cult inducted her as a member, she managed to sneak away and send Bunker Hill security to deal with the cultists.

Despite multiple death threats, assassination attempts and a near-execution, finding herself in sticky situations is a point of pride for Piper, who feels getting into trouble is just part of chasing the truth. 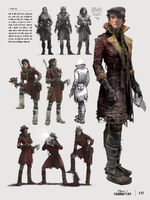 Piper's icon from the Gift of Gab perk
Add an image to this gallery
Retrieved from "https://fallout.fandom.com/wiki/Piper_Wright?oldid=2760346"
Community content is available under CC-BY-SA unless otherwise noted.