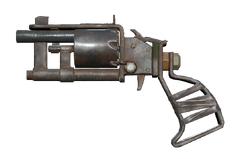 Rifle
Add a photo to this gallery

The pipe revolver is a weapon in Fallout 76.

The pipe revolver is a revolver made from scrap metal and springs to fire .45 rounds. When modded with a stock, it will be a pipe revolver rifle. While the pipe revolver can be a useful weapon, its condition degrades quickly compared to machined guns. This quick deterioration is offset by investing in the Licensed Plumber perk.

Despite becoming a rifle when modded with a stock, it remains affected by pistol perks, from its pistol variant, while being additionally affected by rifle perks. It is unclear whether this is a bug or a feature.

Retrieved from "https://fallout.fandom.com/wiki/Pipe_revolver_(Fallout_76)?oldid=3494298"
Community content is available under CC-BY-SA unless otherwise noted.