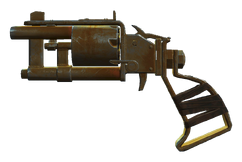 The pipe revolver weapon frame, being chambered for .45 rounds by default, packs quite a punch; while having a low rate of fire. Unlike semi-automatic pipe weapons, it lacks any ammo capacity modifications. However, it can be converted into a rifle by attaching a stock. It features about the same amount of barrel options as its other pipe counterparts, making it a highly versatile weapon system that can be obtained very early in the game, but lacks potential due to its low rate of fire and lackluster damage beyond mid-game.

While the long finned barrel modification makes it so shot spread does not increase while firing, the pipe revolver does not benefit from this for subsequent shots due to how slowly the weapon fires.

Retrieved from "https://fallout.fandom.com/wiki/Pipe_revolver_(Fallout_4)?oldid=3405328"
Community content is available under CC-BY-SA unless otherwise noted.