The pipe gun is a weapon in Fallout 4.

A crude, homemade weapon, the pipe gun models were common in pre-war Detroit street gangs.[1] Two centuries later, it is a staple of wasteland combat, being favored by settlers, raiders and super mutants all over the Commonwealth, filling the shortages of "real" weaponry. Pipe guns are also highly modifiable, capable of turning a standard pipe pistol into a pipe .45 caliber sniper rifle.

Pipe guns can be found in large quantities throughout the entire Commonwealth. While rather weak compared to "real" weapons, they are lightweight and boast more customization options than any other weapon class in the game. Every aspect of the pipe gun up to and including its caliber can be modified and improved, allowing for an enormous number of variants to be crafted. This lets it remain viable far longer than its appearance would suggest, especially considering its proliferation and the huge amount of .38 rounds found across the Commonwealth. Furthermore, pipe weapons require the least investment in crafting perks to unlock all of their customization options - two points in Gun Nut and a single point in Science! are enough to let the Sole Survivor tailor their pipe gun to their every desire. Furthermore, even fully modded pipe weapons are rather light, never surpassing 8lbs.

Out of all the parts that can be seen, upon scrapping, the player character cannot salvage most if not any of the aforementioned components. With Rank 1 of the Scrapper perk, a basic pipe pistol can be scrapped for 4 pieces of steel, while a basic pipe rifle yields 3 pieces of steel. Rank 2 of the perk adds one screw and one piece of copper to the salvage. Rank 3 changes this, sometimes getting gears, springs and even items like nuclear material for guns that have advanced mods like the recon sights.

While in a rifle variant, firing and then swimming will cause the weapon to be held like a bat and prevent the firing of the weapon.[verified]

A pipe revolver, in a pre-War Guns and Bullets magazine titled "Street Guns of Detroit"

Pipe gun concept art in The Art of Fallout 4 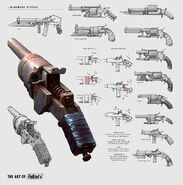