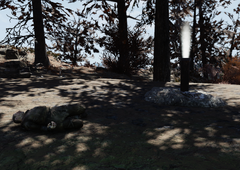 Pipe... is a paper note in the Fallout 76 update Wastelanders.

The note can be found on a corpse near the pipe in the Unusual Pipe random encounter.

This note and its related random encounter were created by level designer Zachary Wilson, who described it as "some nonsense [he] made at 8PM on a Wednesday at the end of the project when no one was looking," yet also called it his most successful contribution to gaming.[1] Originally, "PIPE IS LIFE" was jokingly written in text so small it could barely be read, though this was changed for the final release.[2]