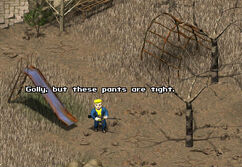 Pipboy and one of his many wonderful quotes

Pipboy as a recruit

Pipboy is a special encounter in Fallout Tactics.

In this special encounter you find the famous Vault Boy, called Pipboy here, wandering around a radioactive playground. He speaks in a strange 50's style and carries an FN FAL. If you have a full squad, he wanders away when you talk to him. If you have less than that, he joins you.

As explained in this article, the "Vault-Boy" is incorrectly called "Pip-Boy" in this encounter - "Vault-Boy" being the name given by its creator, Leonard Boyarsky. It is a common misconception, as the character was never given a name in-game, only referred to in interviews.

The "Pip-Boy" is the red haired, pointy-eared character that appeared on the Pip-Boy 2000 in Fallout and Fallout 2.

He may not join you if your squad has more than two characters.

Retrieved from "https://fallout.fandom.com/wiki/Pipboy_(special_encounter)?oldid=3178559"
Community content is available under CC-BY-SA unless otherwise noted.