“Golly, but these pants are tight.”

Pipboy is an actual person version of Vault Boy, who could be encountered by the Warrior as a joke character. He may join the Brotherhood of Steel and fight as a squad member, but is not considered an official member by the Brotherhood, due to not being a normal person (which in this case is to say he does not fit into any known species of the wasteland).

Pipboy/Vault Boy as a person appears only in Fallout Tactics. 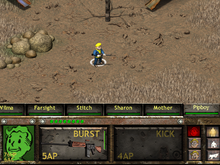