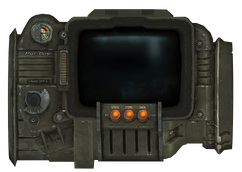 “The Pip-Boy 3000 is a safe, secure piece of Pre-War technology. It guarantees privacy, safety, and guidance in times of need.”— Loading screen

The Pip-Boy 3000 is a pre-War electronic Personal Information Processor (PIP) in Fallout 3 and Fallout: New Vegas manufactured by RobCo Industries, and acts as a database for the player character's personal information and inventory, as well as generating the heads-up display (HUD) in each respective game. An updated version of the Pip-Boy 3000A is the Pip-Boy 3000 Mark IV.

The player character is equipped with the Pip-Boy 3000A; it is indicated that there are other models in the 3000 line, with A being one of the oldest. The Pip-Boy 3000A is worn on the character's left forearm. This multifunction device has been programmed by Pip-Boy developers to display the wearer's stats, area maps, inventory and item properties. It also includes a Geiger counter and a radio. Its screen doubles as a flashlight for fixing visibility issues in dark or obscured areas (enabled by holding down the Pip-Boy button). A user can set their color preference for the display. The four colors available are amber, blue, green and white. The display color must be changed through the pause menu rather than the Pip-Boy itself.

The display of the Pip-Boy 3000 can be set to an over-bright mode and used to illuminate an area immediately around the user, acting as a makeshift flashlight in darkened areas. The user's color preference will not affect the color of the light, and even though the display is located on the person's arm, and is usually facing away from them while not in use, it still provides 360 degree, three-dimensional lighting.

The Pip-Boy light increases visibility while sneaking, even in broad daylight and with a Stealth Boy or Chinese stealth armor.

The Pip-Boy 3000A that the Courier is given by Doc Mitchell operates in the same manner as its Fallout 3 counterpart. There are a few differences in the display:

The Pimp-Boy 3 Billion can be obtained from Mick, the arms dealer located in Freeside at Mick & Ralph's. In order to get this item, the Courier must first inquire as to why the Omertas stopped buying arms from them. They can find the Omertas in the Gomorrah Casino on the New Vegas Strip. When the head boss of the Omertas is spoken to during the quest How Little We Know, he must be asked why they no longer buy arms from Mick & Ralph's. Get them to continue to buy arms from them and return to their shop.

The Pip-Boy glove is a separate item, with a weight of 0, a health of 100,000, an armor rating of 0, and a value of 30. However, the item is marked as "unplayable," and therefore cannot be removed and sold normally. It only fits over the left hand.

In Valve Software's game Team Fortress 2, if a player had purchased Fallout: New Vegas before August 8, 2011, on Steam, they received a free Pip-Boy 3000 as a Store Promotional Item. It can be equipped for the Engineer class. For players who didn't purchase the game at that time, they can purchase the Pip-Boy from the in-game shop called the Mann Co. Store. The special hud also features a Vault Boy-style Engineer giving Vault Boy's signature thumbs up. 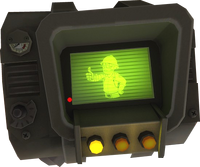 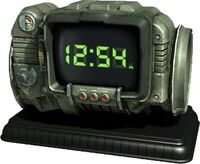 Overseer Almodovar giving the Lone Wanderer their Pip-Boy on their 10th birthday. 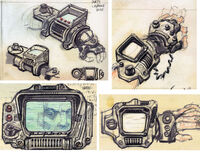 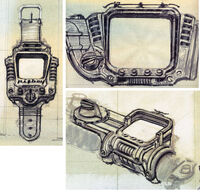 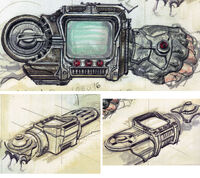 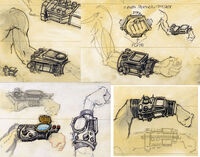 As depicted in Broad Daylight