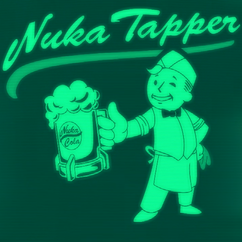 Pip-Boy 2000 Mark VI minigames are a collection of holodisks in Fallout 76.

The Pip-Boy 2000 Mark VI features minigames, which can be accessed if player has found the corresponding holotape for these games. All games have a weight of zero and are worth 300 caps. The holotapes can be used at any time, provided they are in the player's inventory, and they can be played on either the Pip-Boy or on any terminal. They are also all retro games, to match the theme of Fallout 76, and are based on real-life video games published between 1978 and 1988.

In addition to holotape set spawns, the Robco Fun magazine series will added the corresponding holotape to the player's inventory upon collection. These magazines are randomly found throughout Appalachia, including a selection of potential spawn points. Issues of RobCo Fun are affected by Pannapictagraphist and will emit directional audio when the player is in range.

These minigames are an example of Mise en abyme, as the player is playing a game, within a game.

Retrieved from "https://fallout.fandom.com/wiki/Pip-Boy_2000_Mark_VI_minigames?oldid=3152748"
Community content is available under CC-BY-SA unless otherwise noted.