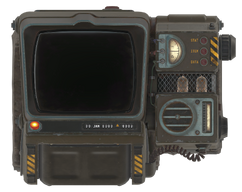 The Pip-Boy in gameplay

The PIP-Boy 2000 Mark VI[1] is a pre-War Personal Information Processor (PIP) manufactured by RobCo Industries and acts as a database for the wearer's personal information and inventory.

The Pip-Boy Mark VI represents a step forward in the development of more ergonomic versions of RobCo's flagship personal computing product. Each Vault Dweller leaving Vault 76 was issued a Mark VI to assist in their goal of rebuilding Appalachia 25 years after the Great War.

The Mark VI maps operate differently than previous versions of the Pip-Boy 2000, utilizing a stylized paper map that lacks local area overview options. Instead of these map features, the Pip-Boy has user status tracking functionality. It is capable of tracking the wearer's status and any active or completed quests and also organizes the wearer's inventory. An overlay of the data is also available. In addition, the device features Geiger counter, an advanced compass that displays discovered locations and nearby persons and creatures, and lighting functionality. A holotape player is mounted beneath the display.

On the main display of the Mark VI are four primary sections, each with specific subsections as followed.

STATS is an overview of the player character's general health, physical well-being, and capabilities. At the very bottom of the screen, the wearer's current and total HP, level, progress to next level, and current and total AP are displayed. Information is then broken down into four subsections:

ITEM is an overview of the player character's inventory. At the very bottom of the screen, the wearer's carry weight limitations and amount of caps can be seen, in addition to showing the damage output of the wearer's current weapon and the Damage Resistance of the armor they are currently wearing. In all sections, the weight, stack weight and value of items in caps are listed when the item is selected.

The DATA section displays the quests that the wearer has. Each quest can be activated/deactivated, with completed quests shown in a darker hue below, separated from those that are current. Each tab displays a description of the current objective of the quest and the actual current objective below the quest title.

The Pip-Boy can be modified with a variety of paints, purchased through the Atomic Shop or obtained as quest or season rewards.

The Pip-Boy 2000 Mark VI in its case, by the player character's room exit 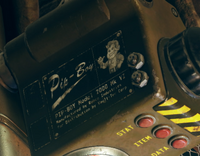 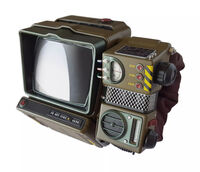 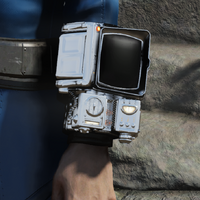 Unused skin found in the game's files listed as "gold"

Retrieved from "https://fallout.fandom.com/wiki/Pip-Boy_2000_Mark_VI?oldid=3495807"
Community content is available under CC-BY-SA unless otherwise noted.