The Pip-Boy is a promotional cosmetic item in Team Fortress 2, by Valve.

The device is modeled after the Pip-Boy 3000 series produced by RobCo Industries. When equipped, the Pip-Boy features a revised PDA HUD to match the looks of the device.

A Genuine Pip-Boy was awarded to all players who owned Fallout: New Vegas before August 8, 2011. 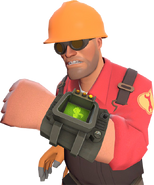 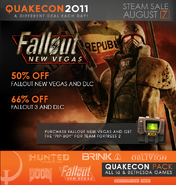 Promotional Steam pop-up for Pip-Boy offer, as well as specials for Fallout 3, New Vegas, and their DLCs. 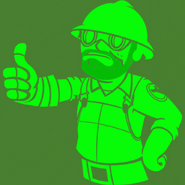 The Engineer, as he appears on the Pip-Boy display.

The demolish menu.
Add an image to this gallery
Retrieved from "https://fallout.fandom.com/wiki/Pip-Boy_(Team_Fortress_2)?oldid=2100079"
Community content is available under CC-BY-SA unless otherwise noted.