“Survival, Teamwork, Research, Discovery and Innovation. It's these five principles that the Pioneer Scouts were founded on that reflect the spirit of exploration during the founding, exploration and expansion of the United States.”— PIONEERBOOK: Foreward

The Pioneer Scouts of America[1] are a faction and pre-War organization in Appalachia.

The five principles of the Pioneer Scouts were survival, teamwork, research, discovery, and innovation. They were the foundation of the organization, reflecting the spirit of exploration during the founding, exploration, and expansion of the United States. The scouts were inspired by Thomas Jefferson and Meriwether Lewis. Together, they created a plan and a team to explore a vast, unknown continent where the fastest thing in the world was a horse, confronting this daunting challenge with courage, methodical planning, innovation and a crew of seasoned veterans and natives. Although what took them two years, the American people could do in less than an hour in the 21st century, the scouts acknowledged it was made possible by the spirit and innovation embodied in these explorers: Step by step, innovation overcoming challenges, building the United States from the ground up. Each generation of scouts was expected to push "Ever Upwards" towards a future of boundless possibility.[1]

The scouts were active in Appalachia, including members within Order 451 and Troop 24.[2][3] Marshall Cassidy of the Appalachian branch encouraged the scouts to embrace their robotic associates as fellow sentient beings.[4] This followed tentative addition of Protectrons as scout guides (honorary members), and one of them saving Lead Scout Ricky Stevens, gravely injured by a bear. Guide Pompy intervened and was promptly elected in April 2077 by popular vote from other Appalachian scouts.[5] The move was also dictated by the fact that most of the non-robot staff was involved in one form or another with the anti-automation protests across Appalachia.[6]

The scouts were headed on a national level by the marshall of the Pioneer Scouts of America, Edmund King in 2077.[1] Scout chapters were led by local marshalls (Cassidy in Appalachia), who in turn relied on lead scouts elected by popular vote to handle affairs.[4] As expected, the official Scoutbook covered a variety of topics, including formal policies about camping[7] and meal preparation.[8]

Scouts largely depended on fundraising to generate the money necessary for their ambitious projects. The Scoutbook generally recommended projects that could involve the community in some way. Bake sales, running competitions, restoration and cleaning projects, innovation fairs, and intramural competitions were common means of interacting with the community, forging a closer bond and sense of commitment. Adults were supposed to supervise and approve these initiatives, while scouts were reminded to be non-intrusive, bring the community closer to the natural environment, share their skills (like CPR and survival), and of course, were not allowed to sell pharmaceuticals, surplus commercial products, protection services, or to engage in criminal activity of any kind.[9]

The Pioneer Scouts had a rather robust offer of training in handling firearms, food preservation, and other skills useful in the event of catastrophic nuclear war.[10] The training greatly expanded in the months leading up to the Great War, as the international situation deteriorated, with scouts routinely reminded that they should only carry weapons that are 10% of their weight, to avoid adversely affecting their developing muscles, remind parents to use VATS while shooting if they are too inebriated, and "shoot first, wonder why later" (preferably in the head). The call "Ammo, Camo, or Cramo" was also a traditional request among their hunting teams, to maximize their ability to contribute.[11]

The organization also ran numerous wildlife conservation programs. The latest in West Virginia, "Care about our Bears!," had been a great success, as the scouts introduced four full-grown breeding pairs of bears to the wilderness areas. While that was not enough to produce a fully genetically diverse population, the scouts hoped to bring in several more breeding pairs in the near future. Whether the program was run out of genuine concern for the bear population or merely to create a target-rich environment for hunting is unclear.[11]

They had their last jamboree at the Dolly Sods Wilderness in October 2077, just days before bombs dropped.[12] They had also planned to use the Middle Mountain Cabins for a costume contest, but that event had to be canceled.[13] As the automated[14] scoutmasters survived the nuclear holocaust, they decided to replenish the ranks of the Pioneer Scouts by opening them up to everyone regardless of age, including Vault Dwellers.

The Pioneer Scouts mainly relied upon traditional "pioneer" items for survival. This includes weapons like the crossbow, black powder rifle, and the Bowie knife. The Pioneer Scouts relied on survival training as well as education, and as such have numerous survival-themed items as well as natural education. Possum Scout progression offers additional tips and rules for backpacking, with translates to backpack upgrades in-game. The group also offers education in technical fields, such as chemistry, coding, physics and robotics.[15]

The Pioneer Scouts appear in Fallout 76 and were expanded upon in the Wild Appalachia update.

The Pioneer Scouts are referred to as the "Tomahawk Scouts of America" in a cut terminal entry.[16] 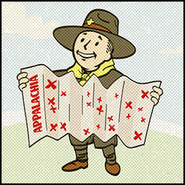 Banner with the Pioneer Scouts logo