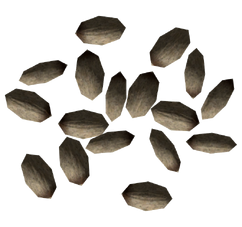 +1 Hit Point per second for 5s
Hardcore mode only:
-10 Starvation

Pinyon nuts are a consumable item in Fallout: New Vegas.

Pinyon nuts do not have a corresponding overworld plant that the Courier can harvest, unlike most other ingredients in the Mojave Wasteland, and therefore must be purchased from vendors or found in various locations detailed below:

Pinyon nuts are based on the real world pinyon pine tree, found in the southwestern United States.

Retrieved from "https://fallout.fandom.com/wiki/Pinyon_nuts?oldid=3495285"
Community content is available under CC-BY-SA unless otherwise noted.