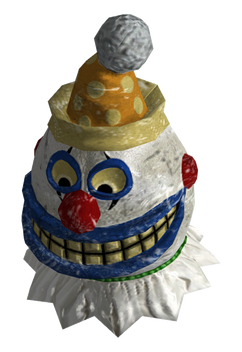 The Pint-Sized Slasher mask is a piece of headwear in Fallout 3 and its add-on Point Lookout.

The mask is the signature costume of the Pint-Sized Slasher, a pre-War serial killer who some believed to be more than a myth.

A clown's mask, but specially made to be wearable by children, and also to strike fear into the hearts of victims.

Found in the Tranquility Lane simulation, this version of the mask has a Damage Resistance of 6 (and can only be repaired by merchants).

Note: After you leave the simulation the mask will be removed.

The non-simulation version of the mask in Point Lookout has a Damage Resistance of 1 and can be repaired with other copies of itself. In addition, it decreases Perception by 1 while increasing Melee Weapons by 5.

The mask is obtained along with the slasher knife during the Tranquility Lane quest if one decides to help Betty kill all the residents of Tranquility Lane. It is then located in the doghouse beside the abandoned house and is automatically equipped upon receiving it.

At the end of the quest or upon exiting the simulation, the mask is automatically removed from one's inventory. The glitch which allows the player character to take items out of the Anchorage Reclamation simulation does not work here due to the fact that the item is a "quest item" and cannot be removed by the player character.

The Pint-Sized Slasher mask can be found in two locations in Point Lookout:

If accessed outside the simulation via console command, it cannot be unequipped without using unequipitem <base_id>, nor removed from one's inventory without resetting the quest flag by using setquestobject <base_id> 0.

The mask's placement in the Point Lookout add-on confirms that the mask is a Halloween reference. You find it atop a female corpse that lies in a bathtub.

The mask in Kenny's cave. 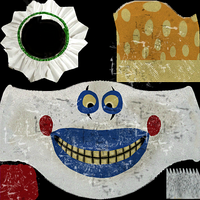