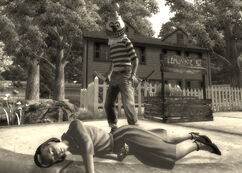 The Pint-Sized Slasher was a pre-War 21st century child serial killer who wore a sinister clown mask, and a black and white striped shirt, with jeans, and used a large chef knife as his signature killing tool.

You are able to pose as this psychopathic, grade school serial killer in the quest Tranquility Lane, as you have an option to kill all residents while posing as the killer child clown himself.

One of the newspapers shown on loading screens mentions the Pint-Sized Slasher. The full article can be accessed via the Capitol Post newspaper office in L'Enfant Plaza:

What American child alive hasn't heard the story of the Pint-Sized Slasher, that diminutive demon in a clown mask who stalks and slashes the innocent residents of supposedly safe suburbia? It's just one of the many folk stories parents use to scare their youngsters into behaving themselves. Or is it?

According to Germantown police chief Joseph Field, the Pint-Sized Slasher may be more real than many people would like to admit. "After reviewing the autopsy results of the Linden Street slayings, we have confirmed that the force and direction of every knife wound are consistent with an attack from a much smaller assailant. A child, to be precise."

Add to the sinister forensic findings this statement from Christopher Atkinson, the one surviving victim of the adolescent assassin, and it becomes clear that the Pint-Sized Slasher does indeed walk among us: "The clown! The clown! He's going to kill us all, do you understand me? He stabbed my brother Shaun right in the face! He killed my brother! The little clown!"

But assuming the Pint-Sized Slasher is indeed a real, tangible threat to the peace loving residents of D.C. suburbia, one question remains: why? What could possibly motivate a child to don a clown mask and murder innocent people in cold blood? We may never know. At least not until the miniature maniac is brought to justice. Until then, all we can do is lock our doors, kiss our children goodnight - and pray they live to see morning.

The Pint-Sized Slasher seems to be a reference to the horror movie Halloween, a film about an unstoppable masked killer who committed his first murder as a child when he stabbed his sister to death while donning a clown costume, complete with a mask.

Slasher at the dog house
Add an image to this gallery

Retrieved from "https://fallout.fandom.com/wiki/Pint-Sized_Slasher?oldid=2568496"
Community content is available under CC-BY-SA unless otherwise noted.