The Pint-Sized Slasher was a pre-War serial killer alleged to be a child. He wore a sinister clown mask, and a black and white striped shirt, with jeans, and used a large chef knife as a signature killing tool.

The Slasher was a myth used to scare children who misbehaved and was said to appear from a dog kennel at dusk to chase the children around with a "toy" knife. The Pint-Sized Slasher was the second-best-selling Halloween costume, topped only by Captain Cosmos.[Non-game 1] Some time in late July 2052, the Pint-Sized Slasher committed the Linden Street slayings. Capitol Post writer Walter Munroe wrote a top story regarding the incident. Munroe included quotes from then-Police Chief Joseph Field, and the sole survivor Christopher Atkinson, who watched his brother Shaun die in front of him.[1]

The Lone Wanderer is able to pose as this psychopathic, grade school serial killer in the quest Tranquility Lane, after Betty tasks them to kill all residents while posing as the killer child clown himself.

In an interview with 1UP.com, Emil Pagliarulo commented on the Pint-Sized Slasher, stating that the idea came from a "dark corner of [his] psyche" that had the idea of playing as a kid, dressed up as a clown, murdering people in a video game, as it would be "sick fun."[Non-game 2] 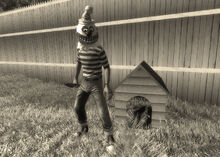 Slasher at the dog house in Tranquility Lane 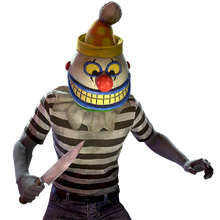 The Pint-Sized Slasher costume in the Fallout 76 Atomic Shop