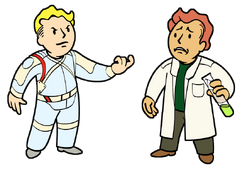 Pinned is an Institute main quest in Fallout 4.

The quest starts upon entering the Institute after finishing Mass Fusion. First, the Sole Survivor must speak to Father, they are then told to go to the house of T.S. Wallace, a wastelander who could help the project. The Minutemen arrive there, and from here one has three choices:

If they either stand down or get killed, the Sole Survivor must then go into the house of Wallace, where another speech check is required in order to get him to go to the Institute.

T.S. Wallace (behind the inaccessible door in the Graygarden homestead)
Add a photo to this gallery
Retrieved from "https://fallout.fandom.com/wiki/Pinned?oldid=3291900"
Community content is available under CC-BY-SA unless otherwise noted.