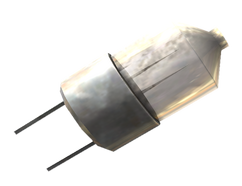 The pilot light is a miscellaneous item in Fallout 3 and Fallout: New Vegas.

In Fallout 3, one is needed in the creation of a Shishkebab. In Fallout: New Vegas with the Dead Money add-on installed, one is required to craft a gas bomb and the cosmic knife super-heated.

They're frequently found in ovens (found in many abandoned houses, for instance in Minefield), or in workshops. A pilot light can be obtained early in the game by searching through Silver's stove inside her house in Springvale, in the Super-Duper Mart in the back room, or in the RobCo facility.

Similar to Fallout 3, pilot lights in Fallout: New Vegas can be found in ovens. Many can be found in the basement of the REPCONN test site, especially in the storage room in the southwest. There are also several of them lying on the floor across the whole basement.

Retrieved from "https://fallout.fandom.com/wiki/Pilot_light?oldid=3125567"
Community content is available under CC-BY-SA unless otherwise noted.