Pilgrim's Landing is a small tourist attraction in Point Lookout in 2277.

What was once a bustling seaside vacation spot is now inhabited by Panada and Tobar the Ferryman. The pre-War signage on the boardwalk reads "open all year."[1] A boardwalk with the House of Wares a short way up north. An inactive Ferris wheel called the Amazing Wheel of Wonder can be found here.

Pilgrim's Landing appears only in the Fallout 3 add-on Point Lookout. 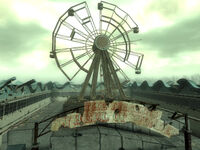 Mini nuke beneath this buoy 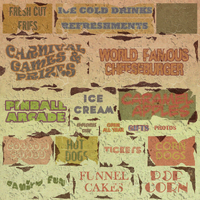