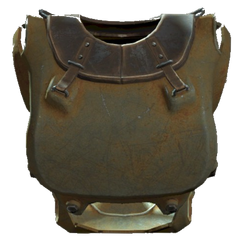 0022670C (Gives a chest armor appropriate to your level with random armor parts, but without the legendary modification.)
0022879C (legendary effect)

The Piezonucleic power armor chest is a piece of legendary armor in Fallout 4 found in the Cambridge Polymer Labs.

Developed at the Cambridge Polymer Labs for the United States Armed Forces as part of the Nucleostrictive Lining Project, the Piezonucleic power armor incorporates a polymer of gold and lithium hydride applied to lead zirconium titanite, capable of converting ionizing radiation to electrical energy. However, the entire research staff of the project was killed just prior to its completion. When the Sole Survivor discovered the lab, 210 years later, they were given the option to finish the manufacturing process of the power armor.

The Piezonucleic power armor's stats depend on whether it has spawned as a T-45 torso or a T-51 torso. It increases the regeneration rate of Action Points when the wearer is exposed to radiation.