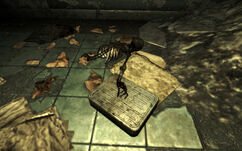 Isley's briefcase on the third floor

Piers Isley was the general manager of REPCONN Aerospace. His remains can be found on REPCONN headquarters's third floor in Fallout: New Vegas.

Piers, manager of the REPCONN headquarters until 2077, was in close contact with RobCo Industries after REPCONN was bought out. He aided RobCo in performing a hostile takeover by eliminating REPCONN's founder and long time CEO Leonard Steeple with the aid of Julia Masters.

He appears to have died under a collapsed roof after attempting to escape the building with a briefcase full of money.

Piers Isley is mentioned only in Fallout: New Vegas..

Retrieved from "https://fallout.fandom.com/wiki/Piers_Isley?oldid=2892633"
Community content is available under CC-BY-SA unless otherwise noted.