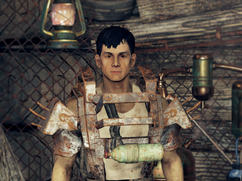 Pierce is a raider in Appalachia in 2103.

Pierce is one of the three raiders that inhabit the Crater war room, along with Burke and Sheena, that Meg Groberg assigned to fight the Brotherhood. Pierce was the one to start the War Party, considering it a family, with his part being to talk and inform others about why they do what they do, and how important their efforts are.[1] Although Meg was initially unsure if she should trust him with the responsibility of that fight, she realized that Pierce had a "silver tongue" and could easily recruit people to rally behind the cause of fighting the Brotherhood.[2][3] Pierce has a deep hatred for the Brotherhood of Steel, seeing all the bad they do and predicting that they will keep demanding more from people.[4] Although the War Party is small, Pierce assures that the Party has support from dedicated Craterites, as well as mercenaries.[5]

He also believes that the Raiders and the Settlers are similar, as both groups of people looking for homes.[6] He believes that Crater is the home for the raiders, wishing to keep Crater as its own place in Appalachia, free from others who may want to take their own space, create their own rules, and enforce said rules on others.[7] Before becoming a raider, Pierce states that he was studying hard in school for "a future that never came to be."[8]

Pierce refers to the Brotherhood First Expeditionary Force as "fascists" when leaving the conflict in the Makeshift vault.[9]

Pierce appears only in Fallout 76, introduced in the Steel Dawn update.

Retrieved from "https://fallout.fandom.com/wiki/Pierce_(Steel_Dawn)?oldid=3480744"
Community content is available under CC-BY-SA unless otherwise noted.