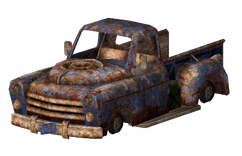 A traditional gasoline-powered engine, retrofitted with a nuclear turbine system. Used for light commercial or personal transport. There will occasionally be a container in the bed, normally a suitcase or a crate. One can be found pulling a boat at Callville Bay. They are dark blue-gray in color in the Mojave. In Zion, they are white with a green stripe down the side and a Zion National Park emblem on the door.

Close up of the Zion insignia

Add a photo to this gallery
Retrieved from "https://fallout.fandom.com/wiki/Pickup_truck?oldid=3362138"
Community content is available under CC-BY-SA unless otherwise noted.