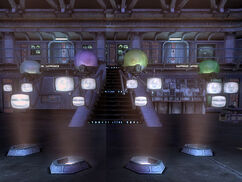 Talk to these think tanks

“WHY, YES. WE ARE FILLED WITH THE KNOWLEDGE YOU SPEAK OF. IF YOU WISH TO KNOW MORE, SIMPLY ASK THE OTHERS, THEY CAN HELP YOU.”— Doctor Klein

Picking Your Brains is a side quest in the Fallout: New Vegas add-on Old World Blues.

When dealing with each of The Think Tank scientist's brains, the Courier has a few options, as follows.

Doctor 8
Add a photo to this gallery
Retrieved from "https://fallout.fandom.com/wiki/Picking_Your_Brains?oldid=3416020"
Community content is available under CC-BY-SA unless otherwise noted.