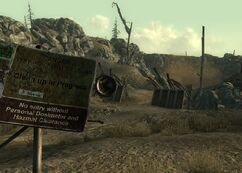 Complete Picking Up the Trail

“The Enclave. They've attacked Project Purity. James is dead... there may be more. I don't know. You have to do something!”— Doctor Li when first speaking to Elder Lyons

Picking Up the Trail is the ninth main quest in Fallout 3. It is also an Xbox 360/PC achievement and a PlayStation 3 Trophy.

Escort Doctor Li inside the Citadel.

Picking Up the Trail begins after Doctor Li speaks to Elder Lyons through the intercom, and the front gate to the Citadel is opened. The first objective is straightforward; escort Dr. Li inside the Citadel. There is no fighting, just follow her through the door to the Citadel courtyard, which is directly across from the front gate. Upon entering the courtyard, Elder Lyons approaches and Dr. Li speaks with him about Project Purity and what recently transpired, and requests his help. At this point, Dr. Li and the three men that were being escorted are no longer in the Lone Wanderer's care, and the objective is completed. It is now possible to ask Elder Lyons for permission to begin training to wear power armor, and he will consent.

The next objective is to ask Scribe Rothchild for pre-War computer access. He is located in the Citadel laboratory. Proceed across the courtyard to the laboratory door in the southwest corner of the courtyard. Then go speak to Rothchild, following the map marker to find him. He will give permission to use the Vault-Tec computer terminal in the archives, located in the A ring. While in the lab, make sure to grab a copy of Duck and Cover! from the bathroom.

Use the Vault-Tec computer in the Citadel Archives to locate a G.E.C.K.

Up the stairs to a door in the southeast corner of the laboratory, leads to the Citadel A Ring. Once in the A Ring, head right to the Vault-Tec computer on the south wall. When going through the information on the vaults, the Lone Wanderer finds out that Vault 87 was issued a G.E.C.K. under the non-standard equipment list. This objective is now finished. While here, make sure to grab a copy of Guns and Bullets, which is in the room called 'the Den.'

Follow the map marker to Scribe Rothchild. He may be in the courtyard. When asked about Vault 87, he says that he will reveal where it is. Follow him to the wall map in the Citadel Laboratory. There he states that Vault 87 can't be entered through the main entrance because of lethal radiation levels. A back entrance through Lamplight Caverns must be found. Map markers for all of the other vaults except Vault 112 (accessed via Smith Casey's garage), will also be received.

Once Lamplight Caverns is found and entered, Mayor MacCready will stop the Lone Wanderer at the gates of Little Lamplight. It is possible to convince the mayor to let the Wanderer in with a Speech challenge or with the Child at Heart perk. Failing that, the only way into Little Lamplight is to complete the Rescue from Paradise side quest.

Once in Little Lamplight, there are two ways to get to Vault 87:

Retrieved from "https://fallout.fandom.com/wiki/Picking_Up_the_Trail?oldid=3486156"
Community content is available under CC-BY-SA unless otherwise noted.