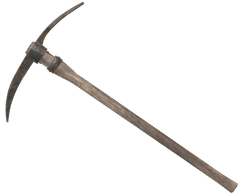 The pickaxe is a weapon in Fallout 76.

The pickaxe is a two-handed makeshift melee weapon with decent damage, but a slow swing speed. It consists of a wooden handle with an attached metal spike and chisel, originally used in Appalachia's many mining operations before automation took over the industry.

Lady holding a pickaxe in Greg's Mine Supply
Add a photo to this gallery
Retrieved from "https://fallout.fandom.com/wiki/Pickaxe?oldid=3422214"
Community content is available under CC-BY-SA unless otherwise noted.